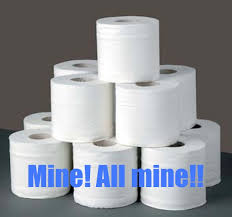 I’m keeping the curtains drawn. Outside I can hear marauding gangs breaking into houses. There are screams. Smashing glass.

Through a crack in the bedroom curtains I can see a burning police car.

It started small and quickly got out of hand far faster than anyone could’ve predicted. It seems like just yesterday I went to the shops because we actually needed soap and some soft, quilted, Aloe Vera TP.

Food and water are still plentiful, but I don’t know how much longer we can hold out.

Not even Amazon drivers will deliver. I’ve been on hold to customer services for three hours now, having spent our last £314.92 on a 9-pack of precious bog roll. They say it’s been delivered but it hasn’t. The driver probably sold it for double, or he was carjacked…

Almost all of our neighbours have fled or else just disappeared.

We’re rationing now, and for the first time in our lives we can see that having a bidet holds some purpose, not that we have one but hey ho. Two sheets at a time, that’s all, and we’ve made a pact not to discuss what happens.

It’s chaos outside now. We’ve heard announcements from passing military vehicles warning us to stay indoors, that martial law has been declared, and that anyone caught outside could be shot.

I don’t know how much longer this can go on.

Fires are raging. The whole horizon is bathed in a deep red glow and all I can think about is that so many of those houses would’ve had perfectly good toilet paper in them.

Who could do this? What kind of monster would torture their own kind in this way?

We’re all out now, and after the two rolls of kitchen towel we have left it’s onto the baby wipes.

Who are they to say we can’t go out? Everyone is taking the law into their own hands so why should we stay at home and do as we’re told like the good little sheep they want us to be?

I knew I should’ve prepped. I’ve dug out my old motorcycle gear for protection but the best I can do for a weapon is a vegetable knife and a garden rake.

It may not look like much, but god help anyone who gets in my way.

I’ve worked my way higher up in the hierarchy of the survivor’s camp. If I can just take out one more of the lieutenants I’ll be a shot-caller. That bitch Karen is still in charge of the TP haul, and I swear if I get the opportunity I’ll take her down so fast she’ll think she was in a plane crash.

I’ve been named a general in the army, but I suspect that’s just a publicity move ahead of the impending battle. We’ll defend our stocks to the death.

A last-minute ceasefire was called. Negotiations are tense but nobody’s walked away yet – we’ve all got so much to lose if this turns bloody.

At the moment it looks like we’re going to be able to trade for some soap, and hopefully that’ll keep all-out war at bay. At least for a while.

Peace won’t last long. A few people have caught a virus and seem to be getting better without much medical treatment.

That doesn’t mean we can relax.

Everything is different now, and nothing will ever be how it was again.

The clans have united and we’re marching on France. Everyone says they still have toilet paper. If they don’t, then we’ll move on. We’ll take Spain, Germany, Portugal, Belgium, Poland, Ital… okay, maybe not Italy. We’ll sweep the continent clear of anyone who gets in our way!

The Russians finally came. Who knew they’d have stockpiled years’ worth of the stuff? We’re weak and diminished from almost a year at war, and even though the troops facing us are conscripted they’re fresh.

We’ve drawn lines now, and the stalemate is killing me. It’s a true war of attrition, facing off from our respective trenches only fifty paces apart in some places.

It’s too much. I’ve urged command to order the advance but those spineless bastards are too comfortable back at field headquarters. The final straw was today, when one of the young men opposite my position started laughing and throwing a whole, fresh roll of the white gold over our position like a streaming grenade.

I ordered him to be shot.

It’s just a matter of time before they retaliate.