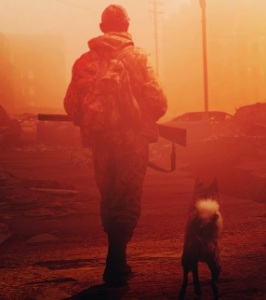 The masses have spoken, democracy rules, and public opinion reigns supreme. A request from the Facebook fan page, is for a blog post on the background of Dan. Other suggestions were about how I’ve got used to having fans (I haven’t really, not yet!) and about my writing processes – for more on that check out Keystroke Medium’s YouTube channel, and watch me waffle on in between the rude jokes.

So anyway. Dan. Our anti-hero. The reluctant, grumpy, emotionally constipated, smoking, drinking, tactless and violent (when necessary) leader of the rag-tag band of normal people.

A few questions have been fired about, so I shall try to answer these in no particular order:

Is Dan based on me?

No. Apart from the grumpy and reluctant bits.

Do I see bits of Dan in myself?

Not overtly, but I think that Dan is the person I would hope to be most like if the ‘S’ hit the ‘F’. Like almost every situation a person faces, their theoretical response is usually the polar opposite to their instinctive one; i.e. running towards trouble instead of away from it.

Is there anything about Dan I regret?

Yes. Absolutely. I regret not putting him through more to see if the loosely held together pieces – held together by nicotine and stress, as well as the character who is really his glue – actually came apart and how devastating that would be.

Like watching a car wreck; you know you shouldn’t stare, but you literally can’t help it.

I regret that we never got to see just how far he could go before he either got scared, became too physically broken or just gave up hope. Nothing I came up with pushed him far enough, no matter how brutal the incidence or reaction.

I mentioned Dan’s glue. Take a moment to think who it is – for you and for me.

Is it Marie? His love, the mother of his child, the fierce and wonderful woman who always called bullshit on him and kept him grounded?

Is it Neil? His first friend in the new world, his constant companion who never questioned him, never wavered in his support of the man himself, and followed him to the gates of hell?

Is it Ash? The very epitome of undying loyalty; the perfect blend of comedy adorable and savage killer?

To me, their relationship says a lot about society and human nature. Dan decided to raise her like a daughter, and she decided to see him as a father. No biological bond is needed to accept family status, as I truly believe parenting is a position willingly taken up and is not, nor will ever be, a simple birth right. He earned his place in her life, and she earned hers in his. Their bond is so strong, both in family love and in a deep camaraderie that neither would want to fail in front of the other, nor would either of them let the other fail because of them.

(Very minor) SPOILER ALERT: For anyone who hasn’t finished Rebellion yet, please look away for the remainder of this paragraph. What epitomised their link, their intrinsic and symbiotic relationship, was when Leah truly came of age and disobeyed her orders. When she looked around for an adult to make things right, and finally realised that she was the adult.

When, in response to the question of where she was going, she turned and replied simply, “To get my Dad”

Anyway. Some of you may be yelling “No! It’s Ash!”, but I’ll explain the mechanics of why it isn’t. Ash isn’t so much a stand-alone character in his own right, but he is part of Dan. He’s actually the part of Dan that people can like and find easier to relate to. Think Mini Me and Dr Evil when he does the, ‘you complete me’ bit (Austin powers 2: 1999) and you’ll be about there. Ash is an extension of Dan; the beautiful and savage animal inside of him, only outside. I know what I mean.

So, who would you be?

Are you a Dan, or are you a Chasseur?

An Olivier, or a Rich?

A Marie, or a Sabine?

One thing I have learned, is that whoever you think you’d be, you’d likely be someone very different.

And that might surprise you, for good or bad reasons.