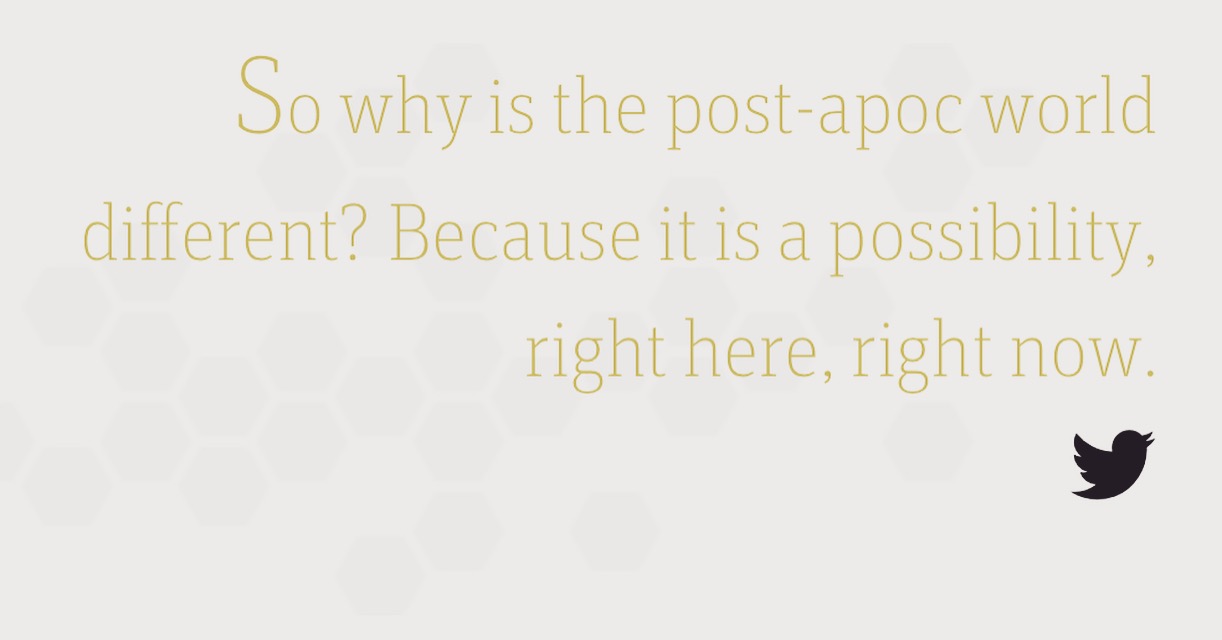 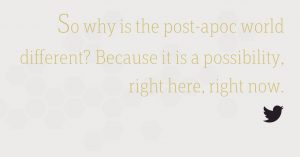 What is it about post-apocalyptic science fiction that people love so much?

We all like to delve into the realms of fantasy and escape the often mundane day to day of our real lives, and for most people that disassociation comes in the form of television or audiobooks or even actually reading something, but there’s something very unique about the PA.

Not to place any coin in the meter of the conspiracy theorists, but the likelihood of there being werewolves and vampires and wizards among us, living in secret, is pretty slim. Aliens? Yeah, maybe one day, but now? Interplanetary colonization? Not in my lifetime.

So why is the post-apoc world different?

Because it is a possibility, right here, right now.

We can all enjoy a tale of dragons and demons, of Lycans and bloodsuckers, magic and time travel, but all of these things exist solely in the imagination of the average person living in our lifetime. Take another situation, say an economic collapse leading to money being an irrelevant factor, where personal wealth stood for nothing and where protection couldn’t be bought; either with your cold, hard cash or by the bounds of society which would fall apart, on the whole, just as rapidly as the banks.

What about the fallout from World War III? If East and West puff up their chests like a pair of competing cockerels and throw the ultimate F-you, and to hell with the consequences? What about the risk of global pandemics? New and terrible diseases that we have either created ourselves or else uncovered from eons past? Natural disasters? A mass coronial ejection, or solar flare for those who don’t want to Google that? Global warming and rising sea levels (I actually liked “Waterworld”)? EMP attacks?

What if any of these situations happened tomorrow, and you and yours were left to defend what you had and were forced to survive without help being a phone call away?

That’s where PA differs from other sub-genres of sci-fi, because it’s a real possibility every single day.

I’ve written about global pandemics, WWIII, and futuristic dystopian settings where Big Brother’s eye is always upon you… just like London, UK, only slightly more violent. I’ve written alternative histories about a zombie outbreak in a time before Twitter and instant, worldwide communication, when ignorance, for once, wasn’t bliss.

Now my insomnia-plagued mind is wrapped up in a whole big book of what-ifs. What if we could see our destruction coming, but we could only save a portion of our population? What if that survival depended on doing things that were morally wrong? What lengths would you go to, to make sure that you survived? And if you did, how would you want to re-invent yourself in the new world? What kind of person do you see yourself being in the new frontier of humanity? What legacy would you leave?

My newest release, New Earth: ARC, answers some of these questions and probably raises a few more. It’s my first foray into sci-fi properly, but it covers my most favorite genre in a way I haven’t considered before. It’s the ultimate prepping story in a way which, if a reader isn’t wary, can lead to the opening of that rabbit hole where you’re forced to consider just how far you would go before you woke up one day sporting a long beard and living in your off-grid log cabin in the mountains sat atop an arsenal of weaponry and canned goods.

So, if it’s a possibility, then why do people love it? Because, and bear with me, a lot of hardcore PA fans actually want it to happen. That’s right, people out there utterly long for TEOTWAWKI, or the end of the world as we know it (I’ve got the REM song in my head now). People crave that opportunity for rebirth; where the regional manager becomes a farmer and the car saleswoman becomes a natural leader with the ability to defend her homestead against any would-be invader. It’s that emergence, that second-chance, that phoenix from the ashes of the world we live in now who can use all of those hard-learned lessons and all of that experience to start again, and to be… better.

At face value, the apocalyptic wastelands of the stories are a dark and depressing place where water is scarce, but people still drive V8s, where everyone has a machete and the trend of wearing sadomasochistic leather outfits is suddenly all the rage, but in truth the post-apocalypse is a place of hope.

Of hope and peace and freedom and lush, green valleys teeming with crops. Of fresh water, of no phones to answer or emails to ignore or bills to pay. Of cooperation, and society and justice. Of an honest labor paying the fruits of survival and prosperity, where the concept of anarchy is taken in its truest sense; the absence of government and the total freedom of the individual.

All of this makes me ask the question, is the concept of the end of the world as we know it such a bad thing?